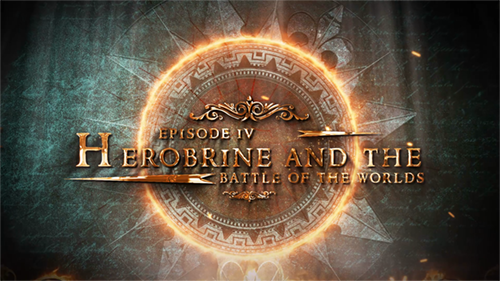 The New Adventures of Adam and Marky: Episode IV Herobrine and the Battle of Worlds 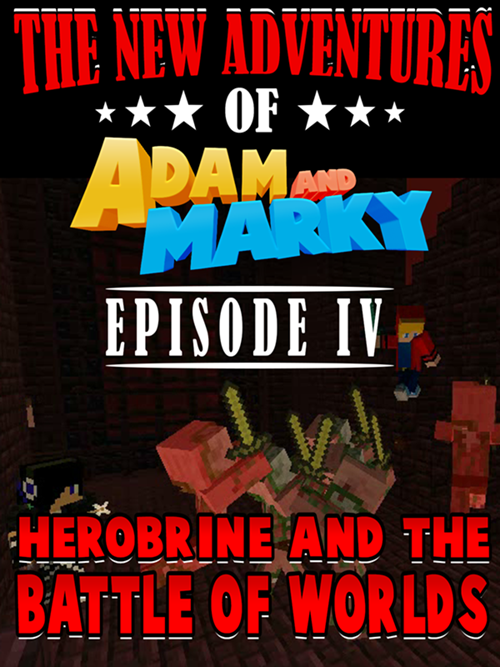 In Episode I “Herobrine is Watching”, our heroes Adam and Marky first encountered the evil Herobrine and his terrifying hoards of monsters,  and in Episode II of our series “Herobrine’s Revenge” this great nemesis unleashes his army against the boy’s unsuspecting town.In Episode III “The Hunt for Herobrine”, Adam and Marky faced their fears. They embarked on a journey of adventure, and learned the ancient and mystical knowledge of crafting that they use to survive their encounter with Herobrine and his fearsome hoards.Now in Episode IV, Adam and Marky meet the powerful and wise Notch. With new weapons and new creatures and spectacular castles, we join our heroes on an epic adventure that spans the Over World and the Underworlds in “Herobrine and the Battle of Worlds”.

In Episode IV our heroes are once again reanimated in this delightful tale about monsters, zombies and the mythical Herobrine that will thrill and excite children of all ages.

The story continues where we last left our heroes suddenly materialized through a portal in the Nether. Adam and Marky commence an exciting new journey of danger and discovery as they explore this strange underworld in their quest to find Herobrine, and to try to stop him from causing more death and destruction.

This is the fourth story of a five arc episode in this series about the notorious antagonist known as Herobrine. In the Minecraft gaming world there have been numerous sightings and rumors of the existence of Herobrine. The official word is that Herobrine does not exist, however, some gamers claim that they have encountered Herobrine. In the Adventures of Adam & Marky Herobrine is very much a reality, and comes to life as a formidable and cruel villain which our heroes must destroy to save their world.

The theme of the story explores how these two dedicated friends can work together and rely on each other to survive. Despite all odds against them they continue to persevere.

This unique short film is unlike most animated movies seen today that are created with complicated graphics programs employing exaggerated fast action motions, screeching sounds and maniacal special effects. This film is about friendship, hope and determination written in a vintage story telling style. Adam & Marky movies are produced in a gaming engine from an ultra popular computer game in real time, using young and talented voice-over actors to give life to the characters.

Bruno, the director and producer of the film, said, “Kids of all ages continue to immerse themselves in the Minecraft game and now are continuously bombarded by pseudo-realistic violent animations in Fortnite.  However unlike Fortnite, in Minecraft they are completely absorbed in the player vs player realm that is unique to Minecraft and have always been fascinated in the prospects of uncovering the real story surrounding Herobrine. The sandbox characteristics of Minecraft have also allowed our talented young animators to create spectacular and imaginative sets in magical realms where the action takes place. We’ve taken this film to the next level by exploring the many facets of Herobrine, who is a well known mythical character, and we also introduce another formidable opponent as well as a new ally in the battle of good and evil. The new character will be familiar to the Minecraft community, and will surprise and delight our fans in this exciting new storyline. We continue to create inspiring stories between two friends who will stop at nothing to save each other even when the going gets tough.”

Watch now as our quirky heroes come to life in this exciting story complete with dramatic tension, scary monsters, evil villains, a sympathetic mentor and discover what new adventures await Adam and Marky.

Shop now on Amazon for Adam and Marky merchandise, books and videos:

Ginzburg Press is a digital production company that distributes and sells mer, clothing apparel and animated short films. For the months of July and August 2016, Ginzburg Press was awarded the Amazon Video Direct Star #AVDStarsWinner given to the top self-publishers in Amazon Prime Video.

EPISODE I
Herobrine is Watching
http://amzn.to/2CWyN9u

EPISODE IV
Herobrine and the Battle of Worlds
https://amzn.to/2RhP838

Trailer: The New Adventures of Adam and Marky in Herobrine’s Revenge

Trailer: The New Adventures of Adam and Marky in Herobrine is Watching

This site uses Akismet to reduce spam. Learn how your comment data is processed.

HEROBRINE IS WATCHING now on Amazon

Ginzburg Press is a participant in the Amazon Services LLC Associates Program, an affiliate advertising program designed to provide a means for sites to earn advertising fees by advertising and linking to Amazon.com